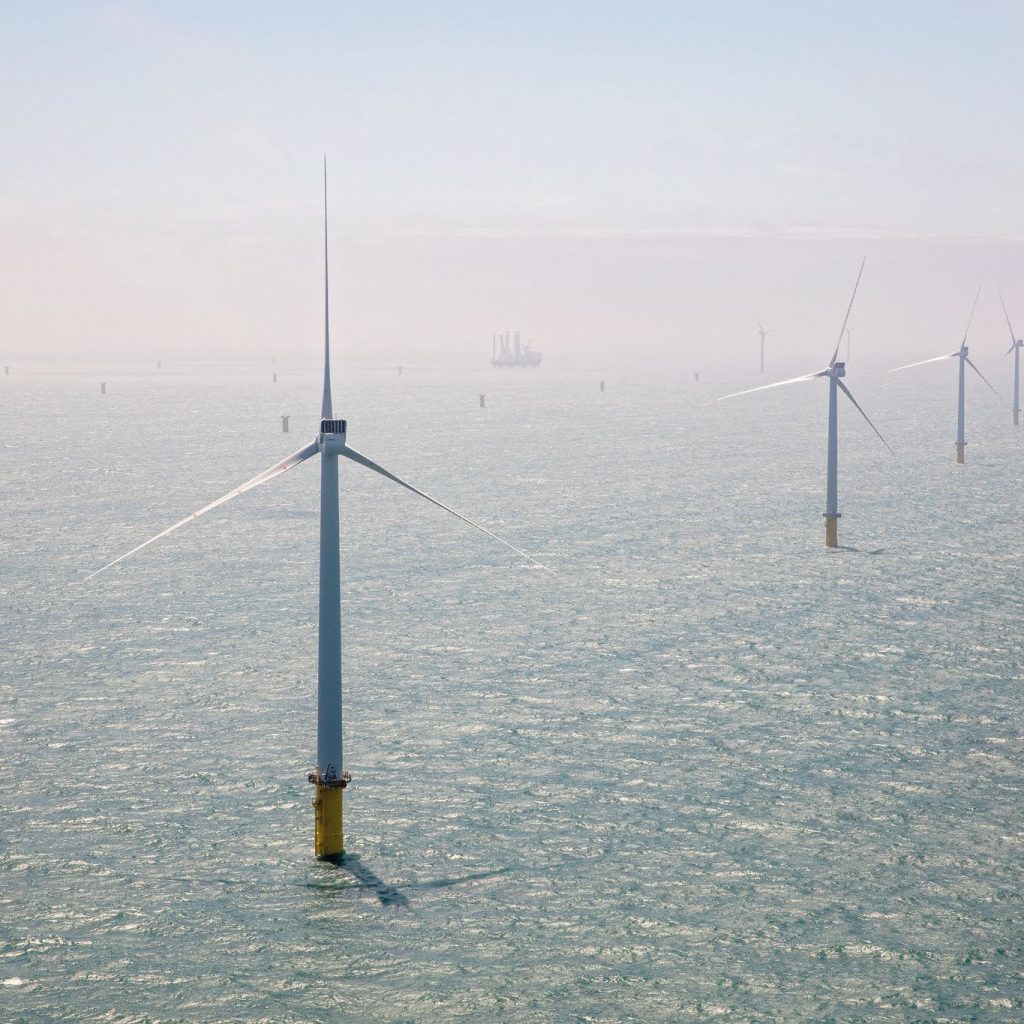 Up to 1,200MW installed electrical capacity to power the equivalent of over 1 million homes and save 1.8 million tonnes of CO2 emissions per year

Wind turbines between 1.5 and 2.3 times the height of the existing Rampion turbines

Up to 3 offshore substations, depending on size of final wind farm scheme

2 search areas being explored for 1 new onshore substation required to transform the power to 400kV, to connect to the transmission grid at Bolney Substation in Twineham

At least 12 horizontal direction drills, including under Climping Beach, the River Adur, railways, major roads and a recreation ground

At this public consultation stage, the Rampion 2 project is made up of the project elements described below, which are in various stages of refinement.

The chart on the right shows the 270km² PEIR Assessment Boundary for the Rampion 2 Offshore Wind Farm.

This does not mean that turbines will be erected everywhere across this sea area, but rather that our exploration of all the constraints will help identify the best and optimum site for a wind farm somewhere within the PEIR assessment boundary. This will be determined following consultation with statutory consultees, key stakeholders and local communities, alongside data collected and assessed from a wide range of technical and environmental surveys. 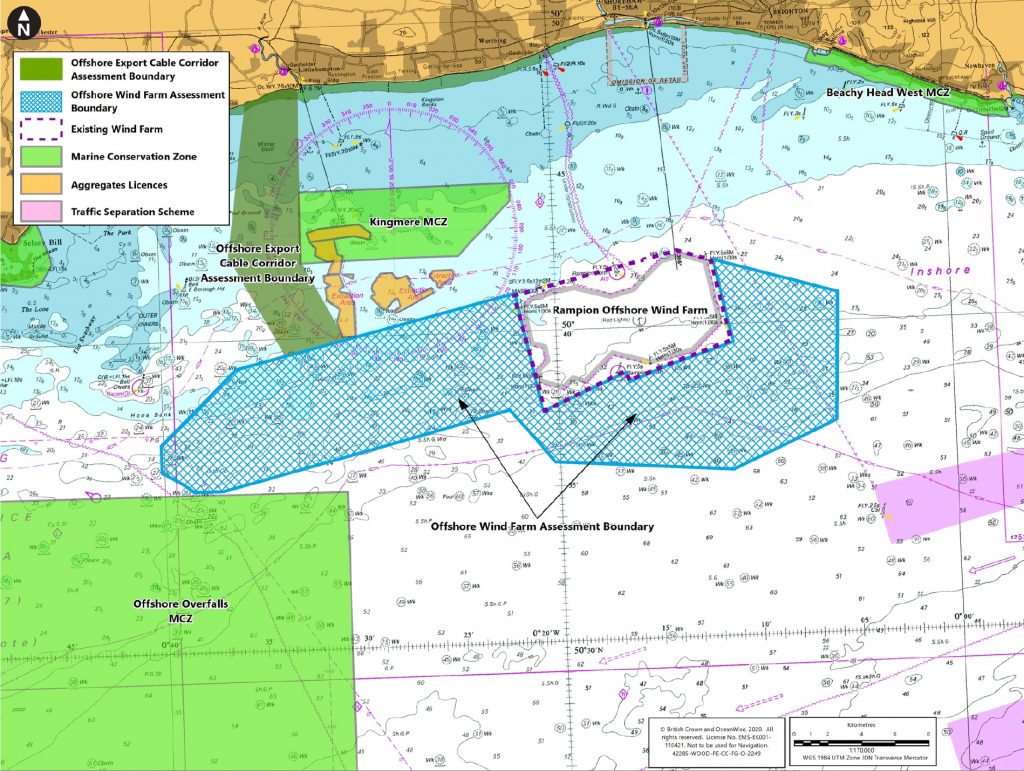 A 50% increase in tip height more than doubles the power output of a wind turbine and the power of offshore turbines has increased 5-fold in just 20 years. It’s relatively early days in the development process and still a few years before we’ll be in a position to order turbines, all of which is subject to consent. Therefore, for the purpose of our Environmental Impact Assessment, we are assessing a worst-case scenario for up 2.3 x the existing Rampion turbine height to make sure we have consent for turbines which are available in the marketplace at the time of order.

In reality, the turbines are unlikely to be more than double the height of the Rampion turbines. With an assumption that the turbines may be around 75% taller than the existing turbines, the power output per turbine would be around three times the existing Rampion turbines, hence the project could generate three times the power output of the operating Rampion project.

The wind farm will comprise up to a maximum of 116 turbines – no more than the number currently operating at Rampion. The turbines will be connected via strings of inter-array cables buried under the seabed.

Many people will be interested to understand how the views would change with the addition of Rampion 2. A decision has not yet been made regarding the specific height, number or arrangement of the turbines. There are a number of constraints which will feed into the final designs that are developed, such as stakeholder engagement and consultation feedback, engineering and environmental surveys, as well as rapidly advancing technology. The turbine layout will also be optimised to maximise energy generation from the site, which may result in changes to the footprint and layout of the turbines.

As is common for all offshore wind farms, the final choice of turbines would be subject to a procurement exercise carried out after a Development Consent Order has been granted to develop the project.

In order to assess the highest possible visual and other environmental impact, we’ve produced a Seascape, Landscape and Visual Impacts Assessment (SLVIA) as part of the PEIR. This preliminary assessment involved producing illustrations of the potential views, assuming the greatest number and largest size of potential turbines, as well as siting the turbines across the widest spread of the area of search and the closest to shore that they may possibly be built. Over 40 viewpoints were agreed in consultation with key stakeholders, such as the South Downs National Park Authority.

A summary of the potential visual impacts is located in the Non-Technical Summary (NTS) of the Preliminary Environmental Impact Report (PEIR). All visualisations produced to inform the preliminary assessment can be viewed in Chapter 16: Seascape, landscape and Visual of the PEIR.

Each turbine sits on a specially designed foundation fixed to the seabed.

The turbines are made up of a tower, a nacelle to house the generation equipment, and three blades connected to a hub. 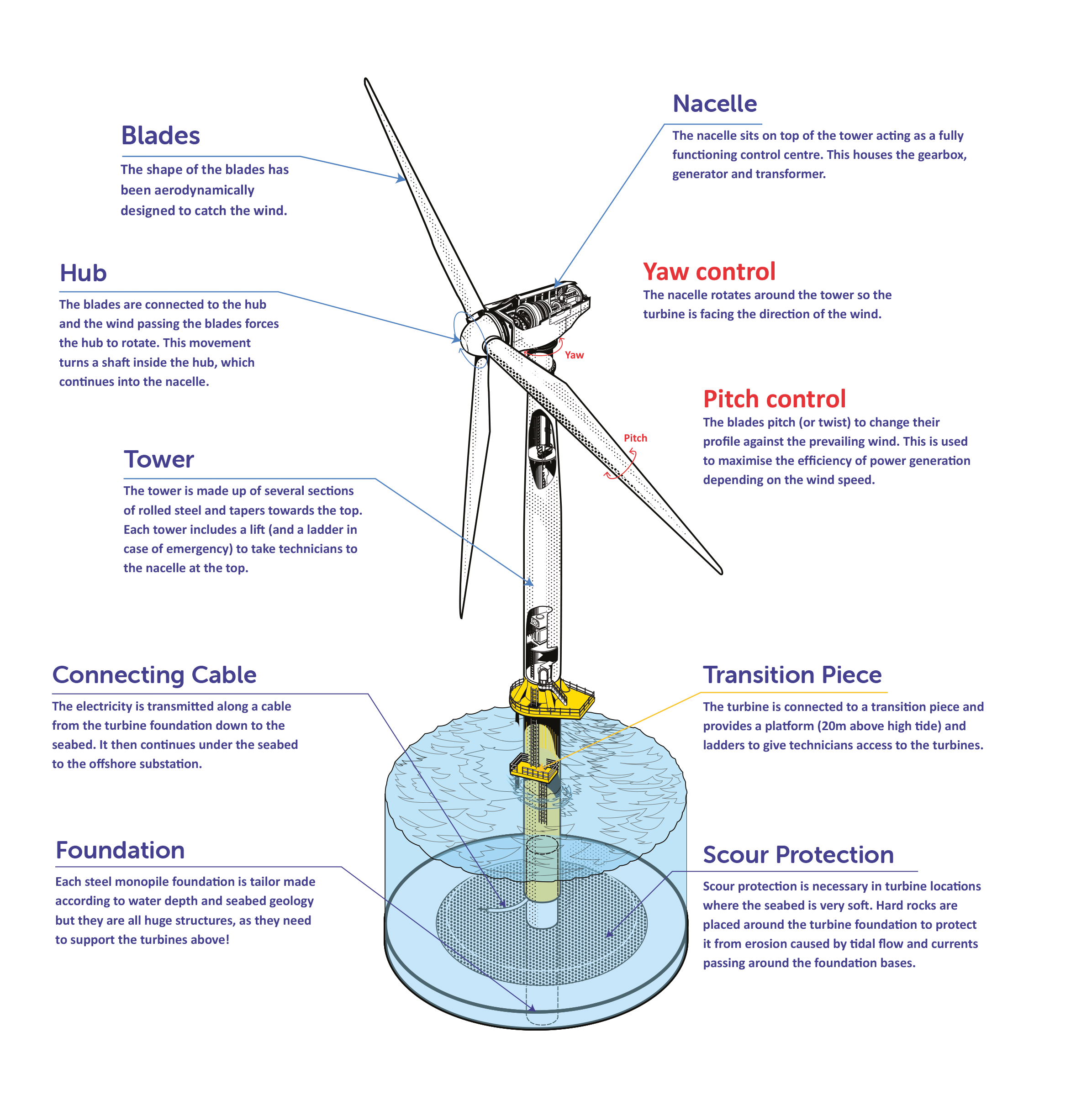 The strings of inter-array cables will transport the power from the turbines to up to three offshore substations, which are required to transform the power to a higher voltage before transmitting the power to shore. Located within the PEIR Assessment Boundary, the final number and location of the substations will be determined by the generating capacity and footprint area of the final wind farm scheme.

Up to four export cable circuits will be buried underneath the seabed in narrow trenches, to carry the power from the offshore substations to shore at Climping Beach – the ‘landfall’ location for Rampion 2. As the export cables move north from the offshore wind farm assessment boundary, they will be located somewhere within the offshore export cable assessment boundary, which stretches 16km to Climping Beach. The exact route for the cable trenches will be determined by the final location for the offshore substations and the results of more detailed site investigations of the seabed which would be carried out post consent.

Following a series of technical and environment surveys, and consultation with key stakeholders and local communities, the least impact onshore cable route has been identified, to take the power around 36km from landfall to the connection point at National Grid’s Bolney Substation in Twineham. Two cable route options remain undetermined at Warningcamp, which form part of this consultation.

The cable route will be undergrounded for the entirety of the route using a trench and ducting methodology. However, horizontal directional drills (HDDs) will be used to tunnel underneath Climping Beach, the River Arun, the railway and major roads to reduce environmental impacts and keep traffic and trains running during construction. 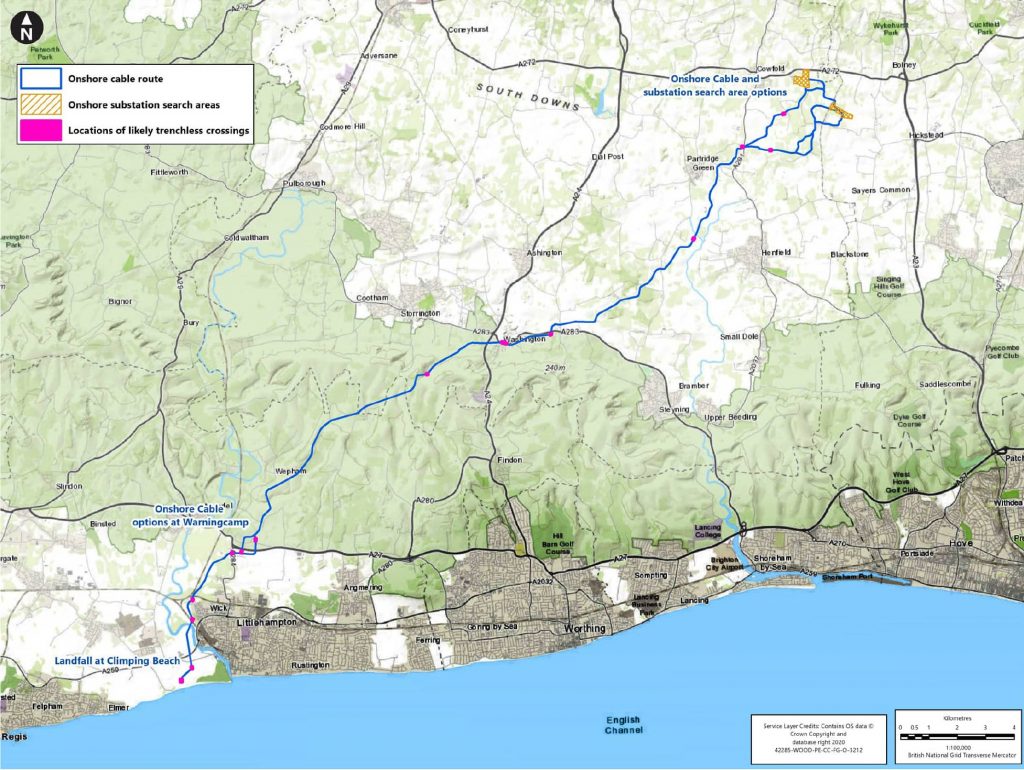 The selected site will need to include an area to host the permanent substation equipment, as well as construction compounds, accesses and laydown areas, in addition to areas for mitigation landscaping and planting to screen the development.

See Factsheet on “How the draft proposals were developed” to explore what has changed and evolved since the first consultation in January / February 2021. 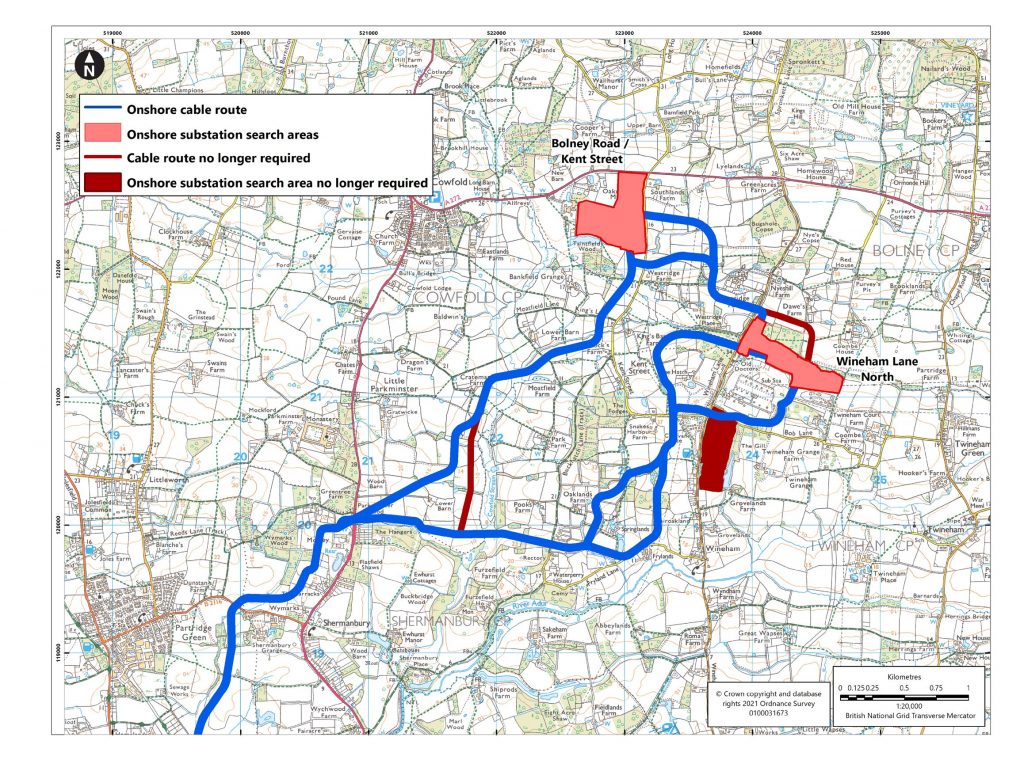