This area considers just one Longer Alternative Cable Route (LACR-02) from Crossbush to Michelgrove, and its associated accesses. We have identified this LACR and another one further east as longer routes, since they go further from our original proposed route than what we have referred to as Alternative Cables Routes.

We refer to this route as LACR-02, running through Areas 3a and 3b. We said at the start of our project that we would keep a buffer to Ancient Woodland and never remove it, as national Government policy provides strong protection for it. However, when we were considering a cable route through this area, we received responses from South Downs National Park Authority, Natural England and the Forestry Commission, suggesting that we should include the route for consultation so that everyone could have their say Our Environmental Assessment of Crossbush to Michelgrove On the following pages you can read about our preliminary assessment of LACR-02 in Area 3. We believe that effects presented in our PEIR from summer 2021 will change for landscape and visual, socio economics, soils and agriculture, water environment and ecology as a result of introducing this route. about it. This will allow consultees to consider whether they think that the limited removal of Ancient Woodland in the eastern part of Area 3a may be justified to avoid going through the “Peppering” environmental project to the northwest.

We will only make a decision on whether to consider LACR-02 any further once we have responses to this and all other potential alternatives and modifications from our consultation.

On the following pages you can read about our preliminary assessment of LACR-02 in Area 3. We believe that effects presented in our PEIR from summer 2021 will change for landscape and visual, socio economics, soils and agriculture, water environment and ecology as a result of introducing this route.

We’ve split this Area into 2 smaller Areas 3a and 3b. including accesses and potential areas of replacement woodland planting. 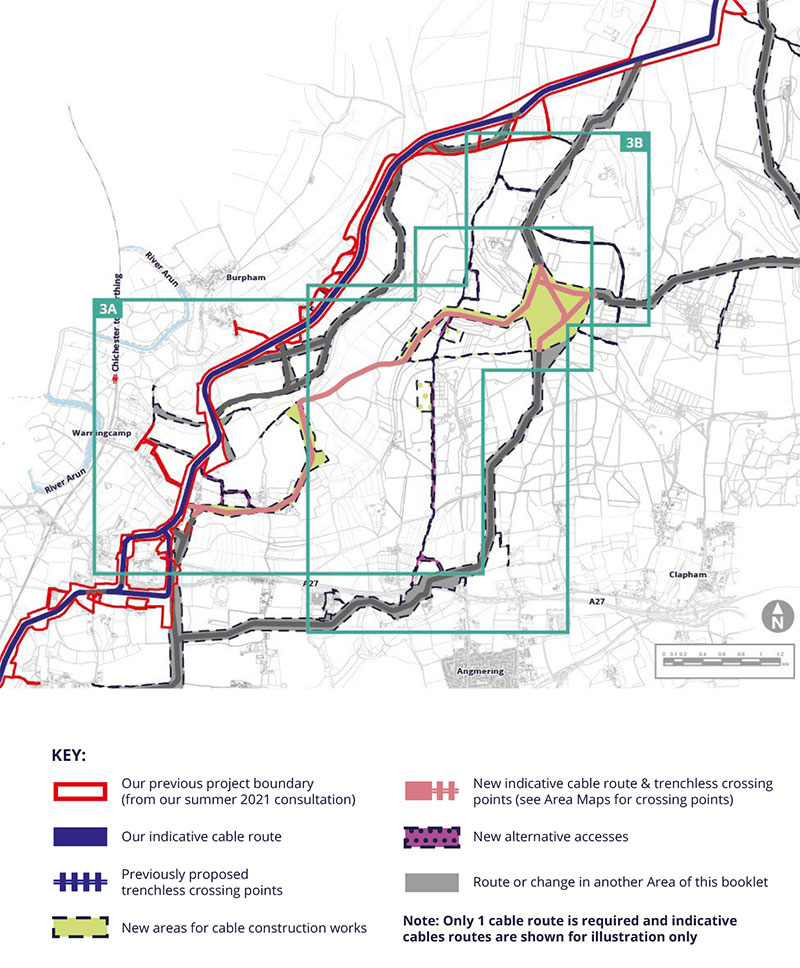 Area 3a: Our new “central route” LACR-02 from Crossbush 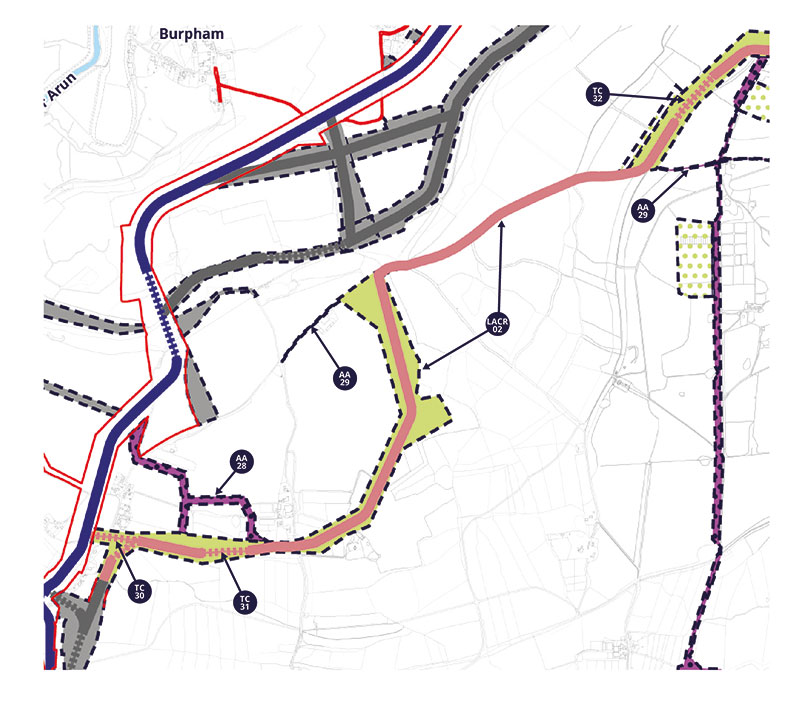 LACR-02 starts to the west at one of 3 locations between the A27 and Crossbush Lane. We use a number of trenchless crossings to pass under Crossbush Lane so that we don’t stop traffic and then to avoid Ancient Woodland at TC-30. We would access this stretch from the north via our cable route or AA-28. After heading north through agricultural land, we would turn sharply to the east and run along an existing private estate road. Going through this area requires us to remove some commercial plantation trees that are on Ancient Woodland soils either side of the estate road. Whilst we have previously said we would avoid Ancient Woodland removal wherever possible, you can read why we are considering this route in the introduction to Area 3 on earlier pages.

The distance through the Ancient Woodland is too long and narrow for us to drill, which is why we would have to cut some trees down. This
area would be more complex and take longer for to build due to the narrow width. It would also conflict with the Monarch’s Way for that stretch which would need to be temporarily diverted.

The western end of AA-29 is shown on this page. It would utilise an existing track and be for light temporary construction access (e.g. for personnel reaching site) and operational access. 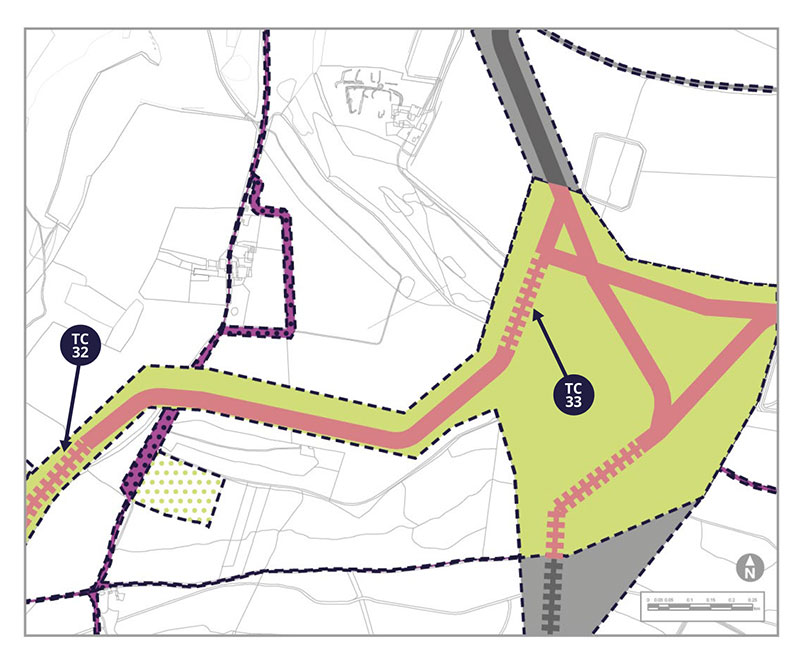 LACR-02 continues from the west through agricultural land with a trenchless crossing TC-32 under Ancient Woodland, a crossing of Angmering Park road with open trenching, and Trenchless Crossing TC-33 on steep ground. A large area is provided to meet other cable options in the east, as this is an area of “karst features”. This means that the chalk below has a lot of cracks and we will need to be careful with the exact location of our final cable route and how we construct it.

If LACR-02 is selected we will provide compensation for the loss of Ancient Woodland. This is likely to take the form of replacement planting in three areas. We would plant more trees than we remove.

You can see proposed locations for this planting below.

Area 3b: Other accesses and woodland for LACR-02 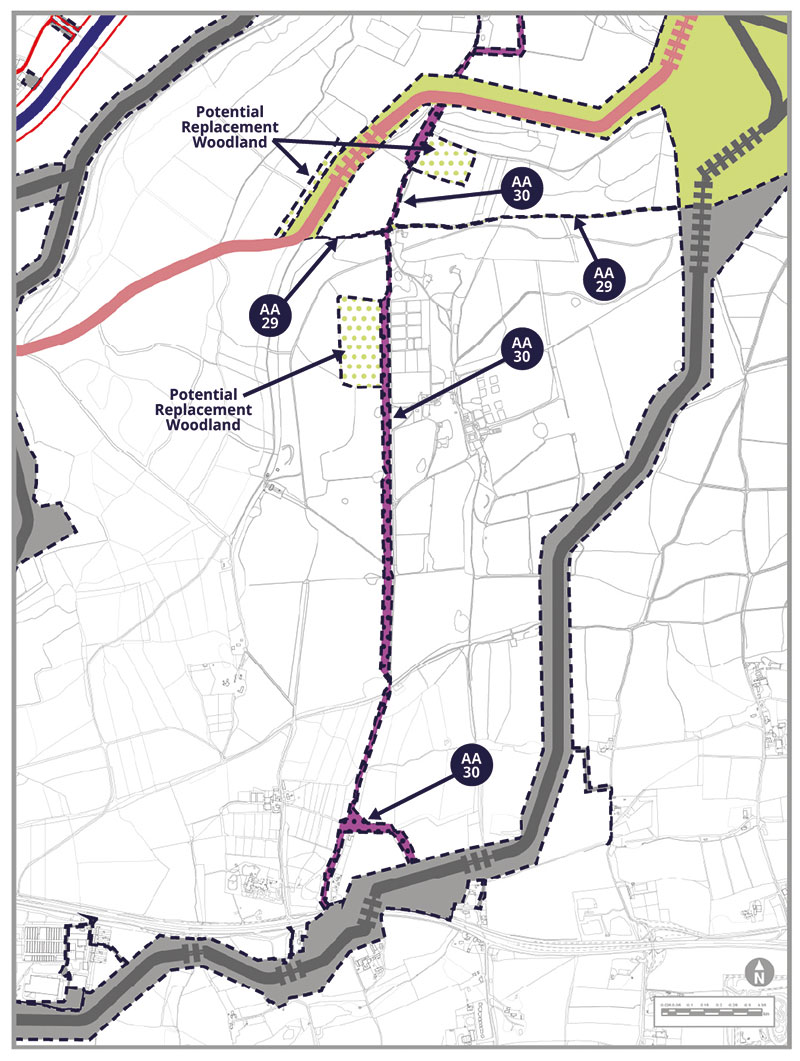 Area 3b: Other accesses and woodland for LACR-02 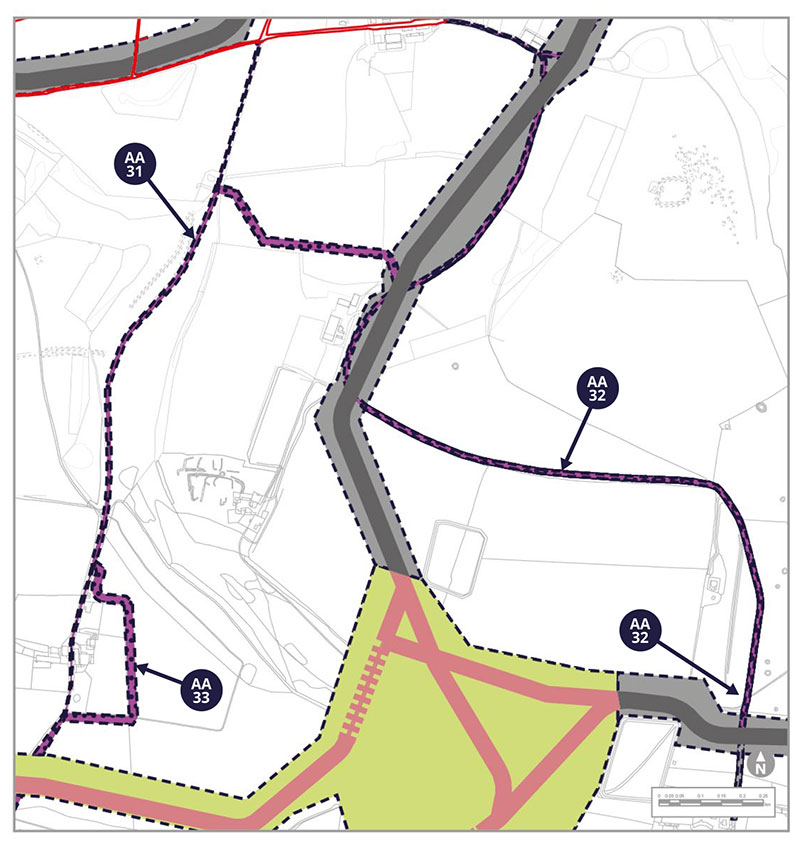 AA-31 would be a temporary construction and operational access along a new temporary stone road south of Lee Farm Copse and would join up with an existing farm track running south up to Barpham Hill. AA-31 might have passing places or other upgrades if needed. A temporary stone road construction access runs would also run for approximately 600m to the east of Upper Barpham Farm before joining back to the existing farm track to join LACR-02.

AA-32 would use the existing Michelgrove estate track with the potential for new passing places. A temporary stone construction access would run for approximately 600m east of Upper Barpham Farm before joining an existing farm track.

LACR-02 introduces the potential for new effects on the environment, which are assessed in our PEIR SIR.

During the construction period, some bridleways and footpaths will need to be diverted or temporarily interrupted, including the Monarchs Way, albeit for a limited duration.

This alternate route and accesses will introduce new potential receptors into proximity in respect of air quality. Different homes nearby would also have the potential to be affected by noise and vibration caused by construction or construction traffic. This route may affect individual roads differently from our previous assessment in a limited way.

Much of this proposed alternate cable route passes along an existing access track through Wepham Woods. The width of our cable corridor means that around 1ha of plantation trees on ancient woodland soils would need to be felled. We would provide replacement woodland planting areas. There would also be more limited tree loss at the Warningcamp Hill to New Down Local Wildlife Site. Elsewhere, the route passes through arable fields similar to those already assessed in our previous consultation.

The route would also affect woodland soils due to routeing through Wepham Wood, and would result in the loss of agricultural land to compensatory tree planting. Our research has not shown any new sources of ground contamination along this route.

There are no standing historic features along the route of the proposed cable, but there is potential for buried archaeology from all periods of time. If this route is selected, we would undertake further site surveys to help us plan how to address anything we might encounter.

At this stage, we have some concerns about the potential for fluid from our trenchless crossings to contaminate groundwater, due to fractures within the chalk bedrock in this area. Therefore if this route was selected, we would commit to undertake an established detailed process called a Hydrological Risk Assessment to establish ways to minimise potential effects.

All of the above receptors have been identified in our PEIR SIR as either new, or with the potential for a change, in relation to socio-economic, landscape and visual, soils and agricultural, ecological and water environment effects.

Tell us what you think. Do you have other things you want to highlight to us?

Manage Cookie Consent
To provide the best experiences, we use technologies like cookies to store and/or access device information. Consenting to these technologies will allow us to process data such as browsing behaviour or unique IDs on this site. Not consenting or withdrawing consent, may adversely affect certain features and functions.
Manage options Manage services Manage vendors Read more about these purposes
View preferences
{title} {title} {title}
Skip to content